By Mike and Helen MacNaught

A group of 27 birders gathered at The Milkwood car park on Thursday 3 March for the morning walk around the Onrus Peninsula, past the caravan park and on to the Onrus Lagoon. 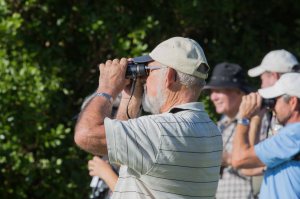 The weather was glorious – mild and windless, in fact perfect for birding. The walk started with great sightings of hundreds of Cape Gannets (Witmalgasse) and other sea birds actively feeding just off the rocks at the entrance to the Onrus River.

Walking along Atlantic Drive towards the Tern Roost we saw White Fronted Plovers (Vaalstrandkiewiete), Sacred Ibises (Skoorsteenveërs) and African Black Oystercatchers (Swarttobies) among others. There were very few terns (sterretjies) – clearly everyone was offshore feeding on the shoals of fish that were passing by.  But we did see a few Swift Terns (Geelbeksterretjies) and a couple of Sandwich Terns (Grootsterretjies) as well as an assortment of cormorants (duikers).

Walking past the caravan park we saw an old favourite, the African Hoopoe (Hoephoep). Later on our way home the two of us saw three Spotted Thick-knees (Gewone dikkoppe) in the same spot.

We walked along the small lane leading to the lagoon and were rewarded with a trio of Fork-tailed Drongos (Mikstertbyvangers) hawking insects. Also seen was a Sombre Greenbul (Gewone Willie).

The reeds had been cut on one section of the lagoon and among the marshy stubble we had sightings of a Common Moorhen (Grootwaterhoender), African Swamphen (Grootkoningriethaan) and a Lesser Swamp Warbler (Kaapse Rietsanger). Across the lagoon we saw Reed Cormorants (Rietduikers), an African Darter (Slanghalsvoël), Cape Weavers (Kaapse Wewers) and a Pied Kingfisher (Bontvisvanger).

On the way back to the car park we deviated slightly past the little private Greek Orthodox Church, where we saw Red-faced Mousebirds (Rooiwangmuisvoëls).

All in all a very pleasant and productive outing, with a count of 54 bird species.

Craig Holmes was re-elected Chairman of Hermanus Bird Club for a third term, and veteran Mike Ford was elected to fill the vacant position of Vice-chairman.

The new Committee, at its first meeting on Monday 7 March, also supported the appointment of newcomer Roy Moulton to the vacant position of Treasurer, and some changes and adjustments of other portfolios.

Mike took over from Margie Ogston, who served as Vice-chair for two terms. He will also organize Walks, Talks and Events. Roy took over from David Watson, who, together with Margie, resigned from the Committee.