A rare sighting of a pair of fynbos birds – Sentinel Rock Thrushes (Langtoon-kliplysters) – was recorded by Ronnie  Hazell in Fernkloof on the eve of the annual Flower Show in the reserve. 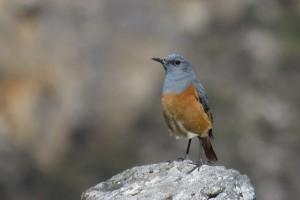 The male of a pair of Sentinel Rock Thrushes (Langtoon-kliplysters) photographed in Fernkloof last week by Ronnie Hazell.

The Hermanus Bird Club is taking part in the festival, organized by the Hermanus Botanical Society. The theme of this year’s festival is Fynbos and Fire, chosen after a fire had burnt a large area of the Reserve in late December 2015.

The floral regrowth in the Reserve promises to be spectacular, and plants flowering after the fire will be a prominent feature of the festival. The fire also affected birds, mammals, reptiles and insects in the fynbos area.

“According to Lee Burman (member of both the Bird Club and the Botanical Society) they have never before been recorded in Fernkloof, though I did see a couple at Mosselnook Hut in Vogelgat a few years ago,” Ronnie said.

“On the same outing I saw a pair of Verreaux’s Eagles and an African Fish-Eagle.”

Pigeons are no birdbrains, according to a New Zealand-German study that found they can distinguish real written words from non-words.

According to a report by news agency Xinhua, published on the IOL website, pigeons can visually process letter combinations to identify real words in English, researchers from New Zealand’s University of Otago and Germany’s Ruhr University said in a statement today (Monday 19 September). 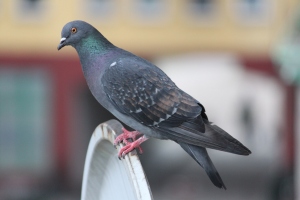 A Rock Pigeon or Dove (Tuinduif), probably the most common pigeon species in the world. The report did not name the species used in the study. Image: Charles Naudé.

They found that pigeons were the first non-primate species with “orthographic” skills related to the conventions of spelling abilities, and they performed on a par with baboons in such a complex task.

In an experiment, pigeons were trained to peck four-letter English words as they came up on a screen, or to instead peck a symbol when a four-letter non-word, such as “URSP,” was displayed. The researchers added words one by one with the four pigeons in the study, eventually building vocabularies ranging from 26 to 58 words and over 8,000 non-words.

To check whether the pigeons were learning to distinguish words from non-words rather than merely memorising them, the researchers introduced words the birds had never seen before. The pigeons correctly identified the new words as words at a rate significantly above chance.

First author of the study Damian Scarf of Otago’s Department of Psychology said in the statement that they performed the feat by tracking the statistical likelihood that “bigrams” – letter pairs such as “EN” and “AL” – were more likely associated with words than non-words.

“That pigeons separated by 300 million years of evolution from humans, and having vastly different brain architectures, show such a skill as orthographic processing is astonishing,” researcher Onur Gunturkun, of Ruhr University, said in the statement.

Otago researcher Michael Colombo said in the statement that “We may have to seriously re-think the use of the term ‘birdbrain’ as a put down.”

The two bird identification courses to be presented by Mike Ford this year had to be rescheduled because Mike has to depart earlier on his Ethiopia trip.

The Basic Identification  Course for Beginners was moved to Tuesday 4 and Wednesday 5 October, and the more advanced course on Tricky Little Passerines to Tuesday 11 October.

The basic course, spread over two mornings, is designed to bring some structure to southern African bird identification to inexperienced or less confident birders. The course covers the seven main aspects of identification and is accompanied by audio-visual aids and printed notes.

The course runs from 09:00 until 12:30. The venue is the Fernkloof Hall. Please bring along your favourite bird guide and/or phone/iPad app.

The more advanced course is aimed at birders who have mastered the basics of identification, but who have still not sorted out those little brown jobs. The course will cover Cisticolas, Larks, Pipits and Warblers of South Africa.

This course runs from 09:00 until 13:00 at the Fernkloof Hall. Audio-visual support and printed notes will be provided.

For both courses, tea, coffee and biscuits will be provided during the mid-morning break.

The cost is R110 per course for Club members and R125 for non-members. Please book with Peta McAdam at peta.mcadam@gmail.com.

What goes on behind the camera is not often shown and told at bird club presentations. Usually the audience just sees the end result in the form of beautiful bird images.

At this month’s club meeting, next week, Gavin Turner will do a presentation on the special requirements of bird photography. He will talk about single lens reflection (SLR) and point-and-shoot cameras, for the benefit of both enthusiasts and casual bird photographers.

Gavin and his wife, Cynthia, are both keen and experienced birders and photographers. He has put his talk together after their recent trip to New Zealand.

The meeting, in the Fernkloof Nature Reserve Hall on Wednesday 14 September, begins at 18:00. Wine will be available before the meeting. It will not be sold, but donations are welcome to cover costs.

The group of 14 birders who braved the rain to take part in the Club outing to Strandfontein on Thursday 1 September, were rewarded with a good sighting of the local rare bird – thus helping to break a Southern African twitching record. 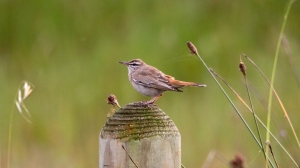 Mike Ford, leading the group, and helped by Sheelagh Bowman, was quick to spot the Rufous-tailed Scrub-robin soon after our arrival at the  Zeekoevlei pinic area.

Trevor Hardaker announced on his SA Rare Birds News report the previous day that the record of 1 110 sightings of the Snowy Egret along the Black River in Cape Town just over a year ago, had just been equalled by twitchers spotting the Scrub-robin over the last month.

For the rest of the day the birding was good, considering that not many migrants had returned. Two exceptions were Yellow-billed Kites and White-throated Swallows. All in all 84 species were identified.

There was no rain, little wind and even some sunshine when the group arrived.

After the Strandfontein water purification dams, we went to Rondevlei, where we were met by more water and more birds than on a previous visit.