The last Club monthly morning walk of the year will be at the Fernkloof Nature Reserve on Thursday 1 December. It will be led by Ronnie Hazell, along a route of 5 km.

The walk will begin at the parking area opposite the Fernkloof Hall at 07:00. Bring snacks and drinks for a picnic afterwards.

The Club’s last talk of the year will be a presentation by the formidable team of Luke and Machteld Horsten, entitled “A birder’s stories from the Kgalagadi”. The Horstens are fond of the Kgalagadi, and have spent quite some time there this year.

Their presentation will be the highlight of the monthly meeting on Wednesday 16 November at the Fernkloof Reserve Hall, which will start at 19:00.

The last walk of the year will also be at Fernkloof. It will be led by Ronnie Hazell, along a route of 5 km. The walk, on Thursday 1 December, will begin at the parking area opposite the hall at 07:00. Bring snacks and drinks for a picnic afterwards.

The very last Club event of the year will be the Christmas party. It will take the form of a braai – at the Fernkloof Hall, of course – on Wednesday 14 December. Members wishing to attend must book with Committee member Peta McAdam.

More details of the party will be published later.

More than 40 Club members enjoyed two outings over the past two weeks, and identified very good numbers of bird species despite adverse elements.

For the first outing we ventured forth up the West Coast on 23 October to one of our favourite spots – Duinepos. The weather, although clear, didn’t play along as we would have liked. As is fairly common along that coast the wind blew and blew, and blew. 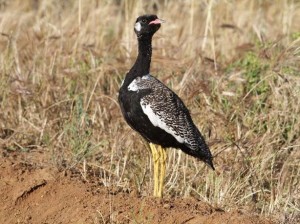 Despite that we managed to see some 153 species, which is really good going. Among those were an Osprey (Visvalk), Curlew Sandpipers (Krombekstrandlopers), various canaries (kanaries), cormorants (duikers), ibises (ibisse), larks (lewerike), terns (sterretjies), and many more. Lee Burman was the capable scribe.

We were lucky that the timing of the incoming tides worked well for us. We sat in the hides while the birds came to us. But we would have enjoyed many more if the dreaded wind had not been blowing so hard.

Several of the group remained for the extra two free nights, and we all enjoyed the wonderful park and its wonderful birds, plants and vista for a little longer.

Our second outing was to the Bontebok National Park in Swellendam, an easily accessible venue with wonderful accommodation.

We managed to find 121 species, from Osprey (Visvalk) to Fiery-necked Nightjar (Afrikaanse Naguil). A highlight was a wonderful display by several Cape Clapper Larks (Kaapse Klappertjies), which in itself was enough to make me a very happy birder. They are wonderful little birds. 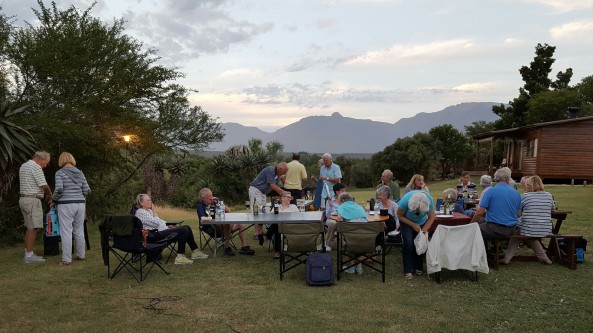 Getting ready to braai at sunset in the Bontebok National Park. Image by Charles Naudé.

Ronnie Hazell managed to find two puff adders – one of which was nearly stood on by Alison Nielson, whose husband, Kurt, dragged her back just in time.

Our scribes on this trip were Barbara Swart and Margie Ogston. We managed to surpass the last trip total of 97 species. The 98th was a Grey Heron (Bloureier) found by my wife, Sue, while I saw no 99, which was a Hadeda Ibis (Hadeda).

Day one was windy, but the group walked and enjoyed the environment. Day two dawned with beautiful weather, and we had a good morning out. But by afternoon the temperature had risen to 38 degrees, and most of the group faded.

As usual the catering was wonderful, contributing to the fun and enjoyment with wonderful members. Both were truly good birding outings and fine opportunities to make new friends.